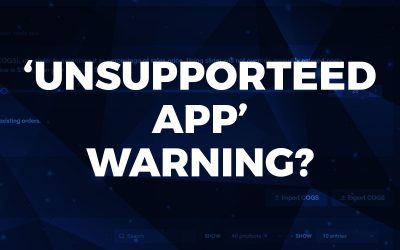 Recently if you logged into TrueProfit through Shopify, you would see a small warning saying “This app is currently unsupported.” Not cool.

But before you turn away and try as hard as possible to keep a 6-feet distance from us, let me tell you there’s nothing to worry about. TrueProfit is working perfectly fine.

So what happened? Well, we accidentally called an unsupported API while developing a new feature (expectably released in late August). This made Shopify think the app was not updated, thus labeling us “unsupported app.” Ha ha. Silly us!

In a nutshell, you can use the app as usual. We contacted Shopify and they said they would remove the notification on August 13. You can always check the app status here: https://status.trueprofit.io/en/

Thank you for trusting us regardless of this issue.